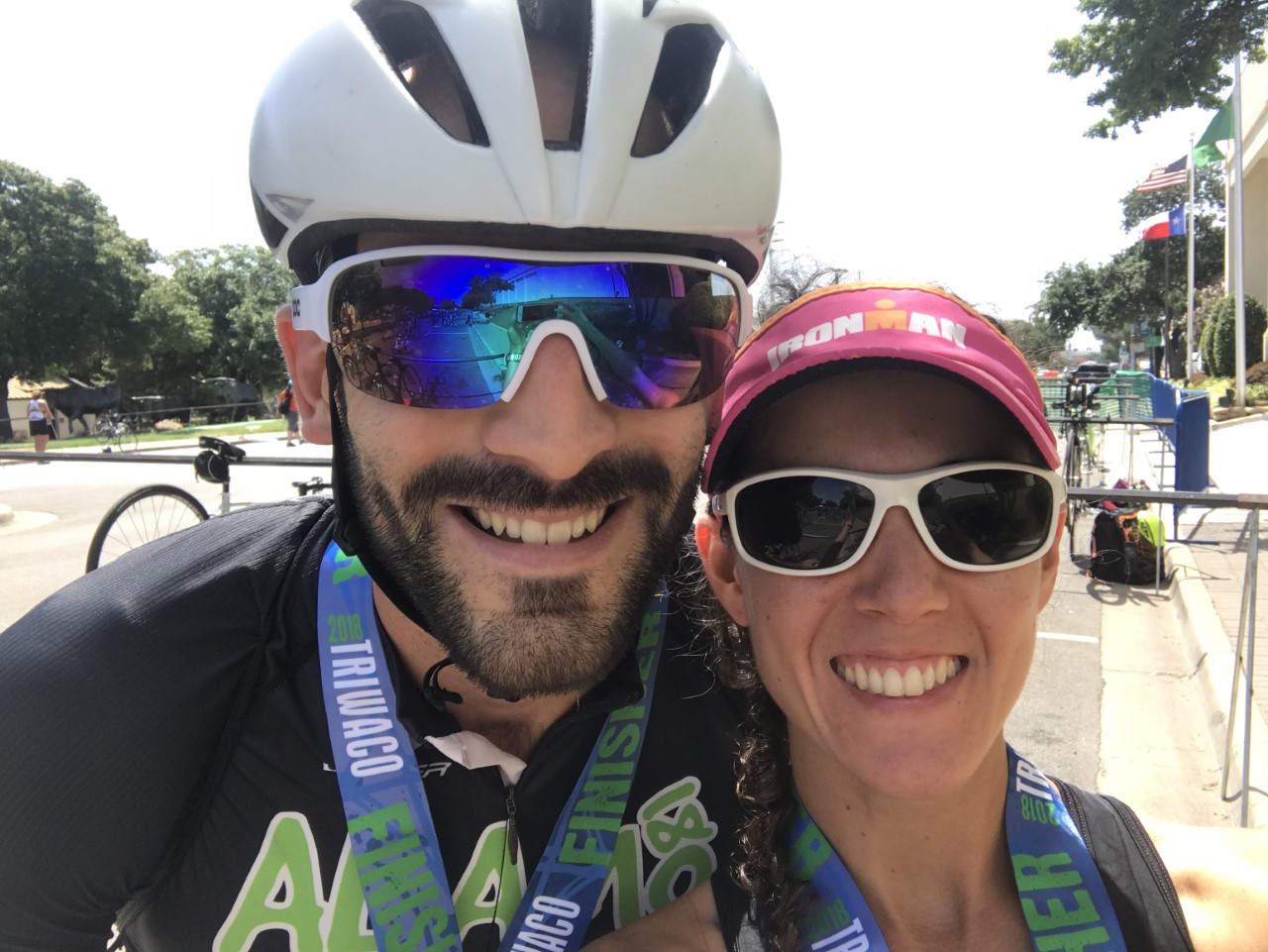 This last weekend, Michael and I raced the Olympic distance at Tri Waco. Going into the race, my plan was to just have fun and test out the course in hopes to have better preparation for Ironman 70.3 Waco in October.  As you read the report, find out my times and see where I placed in my age group…remember I was just racing to just have fun… you will get what I mean as you read on.

Race morning, July 15th, started around 4am and transition opened at 5am. We were all set up and out of transition by 6am. From 6-6:30am there was a race meeting and around 6:45 the race began. It already felt hot and humid by the time the race began.

It was past 7:00am by the time I was able to get into the water. The swim is a rolling start and well spread out. The water temperature was in the 80’s and was very warm. Swimming is my weakest part of the triathlon, but I know that each time I get in the pool or open water, it will all pay off someday.

Nerves were pretty well managed; I assume it is because of the mindset just have fun. The swim was a rectangle. For about 100 yards we swam downstream, then turned and went upstream.  On the way back we finished going downstream, but the current was not very strong race morning so I am not really sure how much benefit we received.  Getting out of the swim was a bit slick, but as always they have volunteers to help you get out the water. As I attempted to get out of the water I started to slide right back in, I quickly grabbed onto the volunteer’s leg for dear life and he eventually got me out of the water and on my feet.  (Note: this was a point that I could have made up 5 seconds if I had not slipped back into the water.)

There is a ramp that zig-zags up to T1. It’s not too long, but definitely adds some time to transition. I was not dilly dallying, but was also not full steam ahead either.  After getting the swim skin off and bike gear on, I was out of T1 and heading out for the bike portion.

The bike was two loops with two turnarounds. The course was mostly flat and fast. The only hills were when we crossed over the overpasses on the course. Winds were a mix of crosswind, headwind and a little tailwind. The road conditions were good except for the back part of the course when heading towards the second turnaround. The road gets narrow and more difficult to pass other slower riders. There is also one spot on the course that is a “no passing zone” which everyone I talked to got stuck behind someone who was slower which cost time as well. (Note:  another place I could have saved 5 seconds). Overall, it was a good bike course but does not have any water or fuel stops so make sure to have enough hydration and fuel with you.

Dismounting and running into T2, I was able to quickly rack my bike, change shoes and finish getting settled as I entered the run course. One thing that saves me time is not wearing bike gloves. I have found that riding without gloves speeds up both of my transitions.

The run is an out and back. The first 2 miles are flat but in full sun; as the run takes you into the park the hills begin but you are now running in shade which helps cool things off a little. The hills only last about a mile. The turnaround is at the top of one of the hills. After turning around and leaving the park, you head back running in full sun and the course goes back to flat surfaces. The finish line is on a bridge and is a great place for spectators to cheer you on as you sprint down to the finish. (Note:  On my run, I stopped to give a team member salt as he was cramping…yet another place to have made up over 5 seconds…but I would stop for him all over again, so I am definitely not blaming him.)

Overall, it was a great and fast course. Having a mindset of just have fun, my times are not incredibly impressive, but turns out if I had saved just 5 seconds, I would have placed 3rd in my age group. While I could sit here and beat myself up about it, there is nothing I can do…until next year. I look forward to racing Tri Waco again someday and trying to improve my race and maybe even placement!

I hope you enjoyed my race report and maybe someday, I’ll even see you out there on the course racing! Feel free to leave me questions or comments.

And remember you are destined for GREATNESS!